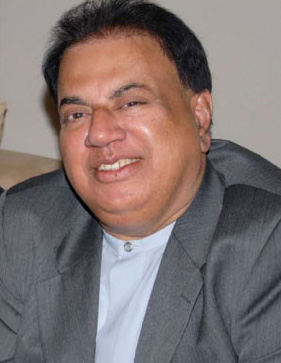 Hamid Malik’s family hails from the Indo-Pak Subcontinent, but he was born in Karachi in 1948. He came to the United States in 1970, and in just over a decade founded Amtrend.

Hamid was renowned for his dedication to his work, coupled with high business ethics. Regardless of how tired and busy he was a day earlier, he would always arrive at his office on time to set an example for his 90+ employees. He strongly believed that leadership was more than just rhetoric, and incorporated that same pragmatic and rational philosophy to all aspects of his life.

Politically and community-minded, Hamid spent as much time organizing fundraisers for various local political candidates at his gracious home or in public places, as he did arranging interfaith meetings to diminish differences amongst religious groups and ensure that harmony could prevail at all levels.

Outside of his family life, he helped many organizations financially and as an advisor while they were trying to achieve their agendas by using his contacts in the Consulate and the Embassy in the United States.

Today, sons Shawn and Waseem carry on their father’s vision, passion and unrelenting dedication to excellence, leading Amtrend into the next chapter of its story.

Amtrend is deeply rooted in the American Dream, and takes great pride in its heritage. Founded in 1980, Hamid Malik took a factory outfitting RVs and transformed it into the country’s leading commercial hospitality-focused manufacturer of furnishings, upholstery and casegoods, with a commitment to innovative design solutions, fine craftsmanship and a superior customer experience—made entirely in the United States.

Never losing sight of his belief in hard work, value for every dollar spent, and honesty in all transactions, Malik created a corporate culture that united a workforce and solidified his vision by treating his employees as stakeholders in the company’s success. In time, his sons Shawn and Waseem joined the operation which had moved beyond its initial product lines of custom restaurant booths and banquettes into forward-thinking designs in other areas of the Guest Services industry. In 2005, Amtrend expanded Hamid Malik’s concept, bringing additional growth for the organization in the Hospitality sector, adding upholstered guestroom/suite/public space furnishings to the company’s portfolio, along with custom casegoods utilizing an array of exotic woods, custom metals, stone and reclaimed/outdoor wood—all bearing the Amtrend hallmark of luxurious, sophisticated fabrics and finishes. Today, Amtrend services its global clientele—including Marriott, Hilton, Starwood, Caesar’s Entertainment, PF Chang’s, Cheddars, Starbucks, Al Shaya Group, Westfield Group and more—from its 50,000 sq. ft. state-of-the-art facility in Fullerton, CA.

Now more than three decades later, Amtrend remains true to the strategic vision of its founder Hamid Malik, and the core values it was established upon—style, innovation and exceptional customer service. Recognized nationally, and now internationally, as an industry trendsetter, Amtrend continues to embody the American Spirit that gave it life in every one of their products, proudly made in the U.S.A.